Alumnus and Life Fellow Professor Sergio Pellegrino (m1982) is Co-Director at the California Institute of Technology Space Solar Power Project (SSPP) which has just launched into orbit a prototype, dubbed the Space Solar Power Demonstrator (SSPD), which will test several key components of an ambitious plan to harvest solar power in space and beam the energy back to Earth. The prototype was loaded onto a flight at Cape Canaveral called Transporter-6 on a SpaceX Falcon 9 rocket.

Professor Pellegrino is Joyce and Kent Kresa Professor of Aerospace and Professor of Civil Engineering at Caltech and a Senior Research Scientist at the Jet Propulsion Laboratory. The SSPP was founded in 2013 with private investment from Donald and Brigitte Bren and the Northrop Grumman Corporation. The Project's vision is to conceive, design, and demonstrate a scalable vision for a constellation of ultralight, modular spacecraft that collect sunlight, transform it into electrical power, and wirelessly beam that electricity to the earth. The basic module of this future solar power system is a giant coilable structure that elastically deploys after launch into orbit, and is made of paper-thin materials of high stiffness. 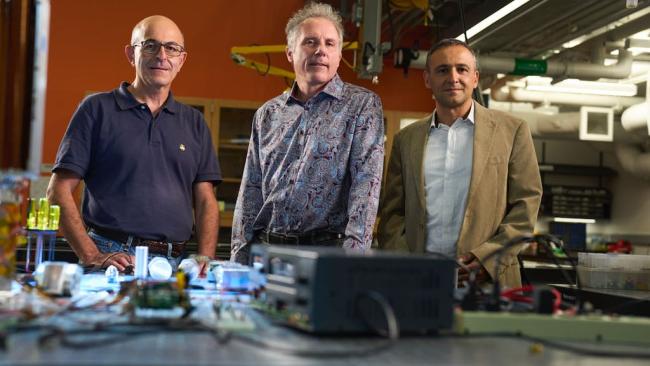 When fully realized, SSPP will deploy a constellation of modular spacecraft that collect sunlight, transform it into electricity, then wirelessly transmit that electricity over long distances wherever it is needed—including to places that currently have no access to reliable power. The prototype will carry three main experiments, DOLCE (to demonstrate the modular spacecraft that would eventually make up the constellation); ALBA (a collection of different photovoltaic cells); and MAPLE (flexible lightweight microwave power transmitters). Following the launch, the Caltech team will start running experiments within a few weeks, with testing and data collection expected to continue for several months.

More information about the the SSPD launch is available on the Caltech website.

Professor Sergio Pellegrino graduated in Civil Engineering from the University of Naples in 1982 and then moved to Cambridge, having been awarded a Research Studentship from Peterhouse. After only one year of research he was appointed to a University Assistant Lectureship and a Bye-Fellowship at Peterhouse. In 1985 he was elected to a Teaching Fellowship at Corpus Christi College, and one year later he completed his PhD on the Mechanics of kinematically indeterminate structures. He was promoted to a University Lectureship in 1988, to a Personal Readership in 1997, and to a Personal Professorship in 2000. At Corpus he was a Teaching Fellow from 1985 to 2001, and Director of Studies in Engineering from 1998 to 2001.

Watch Professor Pellegrino describe the Space Solar Power Demonstrator in this video from 2018.

With thanks to Robert Perkins of Caltech. 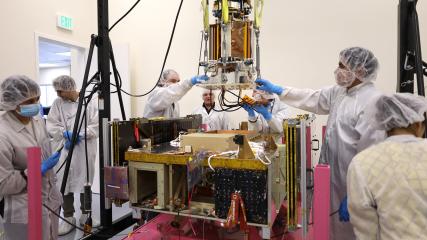