The College is looking forward to welcoming back over 100 postgraduate alumni to celebrate the 60th anniversary of Leckhampton.

The weekend of 11-13 November will host former PhD, MPhil and Master's students who lived at Leckhampton beginning with the 1962 matriculation year.

Friday will see the event launch with a casual dinner in Leckhampton Hall followed by a fireworks display. Saturday will be devoted to a wide-ranging series of talks, presentations and musical performances., followed by a dinner. Sunday brunch will be hosted by the Warden of Leckhampton, Professor JD Rhodes, and there will be National Day of Remembrance service in the College Chapel.

Delivering the Ahmed Lecture on Saturday 12 November at 13.30 will be Corpus alumnus and Honorary Fellow Dr Richard Henderson (m1966). Dr Henderson is a molecular biologist and biophysicist who has been a scientist at the MRC Laboratory of Molecular Biology since 1973. Born in Edinburgh and educated at the University of Edinburgh before coming to Corpus, he was awarded the Nobel Prize in Chemistry in 2017 for 'developing cryo-electron microscopy for the high-resolution structure determination of biomolecules in solution'.

In an article written for The Pelican in 2018 Richard described how he came to chose a college after being offered a place to study for his PhD at the MRC-LMB. He consulted a friend who "wrote back with a wonderful 4-page letter giving a thumbnail sketch of the positive and negative aspects of each of the then about 20 colleges". This friend recommended Corpus "largely because Corpus has just opened new postgraduate accommodation in 1964 in the George Thomson Building.

He described Leckhampton as "..a truly magnificent postgraduate hostel…ultra-smooth, full of interesting people, and much sought after".

Richard will speak on the topic 'Using Electron Microscopy to Understand the Molecules of Life', in which he will speak about his own work in the development of using electron microscopy to view the atomic structures of biological macromolecules that were impossible to view using X-ray crystallography. From this early work, improvements to the method are being continuously developed, with many of the most important molecules now imaged in superb detail.

Richard continues his research at the MRC-LMB. 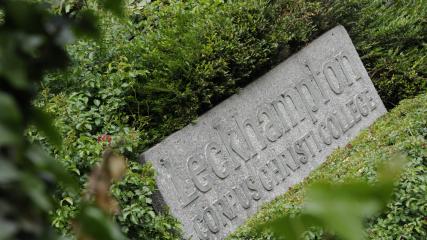