The British Museum exhibition Thomas Becket: murder and the making of a saint opens tomorrow and runs for the next three months. Marking the 850th anniversary of his brutal murder, this special exhibition presents Becket's tumultuous journey from a merchant's son to an archbishop, and from a revered saint in death to a 'traitor' in the eyes of Henry VIII more than 350 years later.

In a Museum blogpost, exhibition curators Lloyd de Beer and Naomi Speakman say, "The image of Becket’s bloody demise at the hands of four knights from the king’s entourage has been depicted countless times in sculpture, wall painting, stained glass, manuscript illumination and metalwork. In the exhibition you see the shocking scene on flasks sold to pilgrims, on brightly enamelled caskets made to hold Becket’s relics, and even on a stone font made for a parish church as far away as Sweden."

Amongst those images are included three items from the Parker Library, shown below.


“We’re delighted to have been able to lend the British Museum these key items associated with Thomas Becket, his friendship circle, his shrine and his commemoration, for this important exhibition” - Donnelley Fellow Librarian and Director of the Parker Library, Dr Philippa Hoskin

Book tickets for the exhibition. 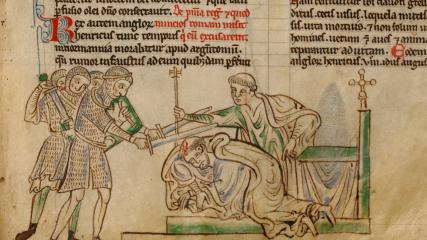